Representative James O’Day and why reporters should ask why

Representative James O’Day and why reporters should ask why

One thousand, eight hundred, and ninety-three words. That’s how much ink the Telegram & Gazette devoted on January 5, 2019 to Representative James O’Day’s (indefinitely postponed) bill to impose a tax on opioid pain relievers for the purposes of funding “treatment of substance abuse, including opioids, in the commonwealth and establishing programs like new addiction treatment and sober living facilities.”

Not one word or apparently a single inquiry by the Telegram & Gazette as to why Mr. O’Day has advanced this bill or any discussion about his financial involvement with the for-profit addiction treatment and sober living facilities.

Not one word of disclosure by Mr. O’Day of his potential conflict of interest. In typical Mr. O’Day fashion, he failed to mention he and Representative John Mahoney are “employees” of Timothy Rassias, the owner of the Washburn House and the former Anna Maria Rest Home that are now for-profit rehab facilities dumped in Main South Worcester. You may recall, Mr. O’Day failed to disclose his interests with Mr. Rassias at the public meeting on the Anna Maria property. [See the “Dump it in Main South Articles from 2017].

Not only is Mr. O’Day an employee, he was listed as a Director at Springhill Recovery Center, another Rassias property.

Here is the screenshot from the 2017 articles: 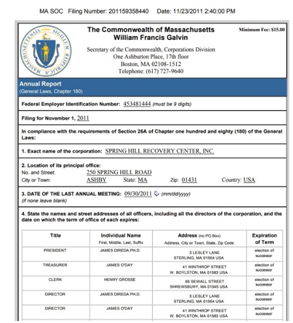 He and Mr. Mahoney both have or had a $5,000.00 per year membership at the Tatnuck County Club with Mr. Rassias. They have refused to disclose who paid for it or whether it was a corporate membership through Rassias which allowed them to purchase the membership at a ridiculous discount.

After Mr. O’Day’s, alleged involvement in the pay to play Probation Scandal, one would think the Telegram & Gazette would properly inquire into any bill Mr. O’Day was advancing. In case you have forgotten, the MetroWest Daily News reported Mr. O’Day was one of the state representatives called to testify:

Also on Monday, Rep. James O’Day was called to the stand in the trial of three former probation officials and said that in July 2007, two months after he had been elected to the House, DeLeo himself called to ask if his district included Clinton and to let him know about a job opportunity at the new electronic monitoring, or ELMO, facility.

O’Day’s recommendation, Stephen Ware, applied for a job at ELMO on Sept. 5, 2007, and John O’Brien, who was then the probation commissioner, wrote a letter also dated Sept. 5, 2007 to the chief justice of administration and management, saying O’Brien was appointing Ware to the job of acting assistant electronic monitoring coordinator with a starting salary of $40,446, according to evidence presented Monday.

The Telegram & Gazette has been aware of Mr. O’Day’s business ventures in the addiction treatment and sober living facilities since August of 2017 when they contacted me to follow up on my prior stories outlining Mr. O’Day’s conflict of interests with Mr. Rassias. They did nothing with the information then either. [See the “Dump it in Main South Articles from 2017].

Mr. O’Day shouldn’t be advancing legislation from which he or his friend Mr. Rassias could potentially financially profit without a complete and full disclosure. The people of Massachusetts deserve a government made up of representatives that represent the people, not themselves.

The Telegram & Gazette owes it to its readers to publish complete and accurate stories that disclose potential motivations and conflicts of interests.