Rep. Jim McGovern: “We have your back, @Ilhan”

Home/The Worcester Independent Leader Blog/Rep. Jim McGovern: “We have your back, @Ilhan”
Previous Next

Rep. Jim McGovern: “We have your back, @Ilhan”

Rep. Jim McGovern joins the anti-American crowd, supports Rep. Ilhan Omar’s statement that the attack on America on 9/11 was just “some people did something”. 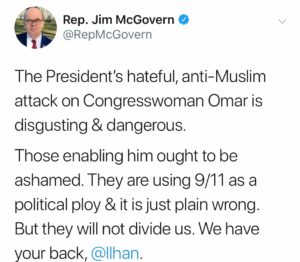 He’s right! The words Omar used to describe the loss of nearly 3,000 Americans that were viciously attacked by Muslim terrorists on 9/11 is hate speech.

This, according to McGovern this is a “hateful, anti-Muslim attack”: 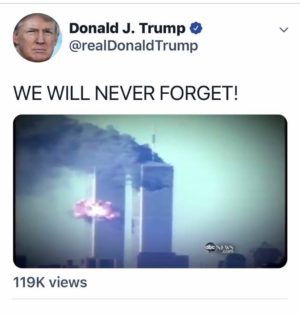 In case there is any doubt Mr. McGovern, we will never forget. Hope this triggers you:

As if McGovern hadn’t already shown his distain for his fellow Americans, his attempt to pretend that he cared at all about the 6th anniversary of the Boston Marathon bombing (another Muslim terrorist attack), he simply stole the language he used in his tweet today: 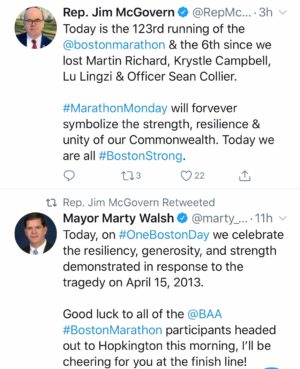 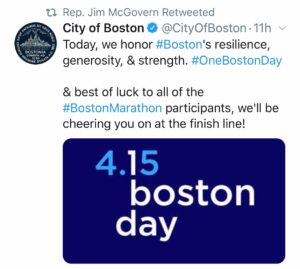 All he did was reverse some of the words from other tweets and changed “generosity” to “unity”. He can’t even come up with his own words, because he just doesn’t care about Americans.

But he certainly cares about Sudan and Yemen: 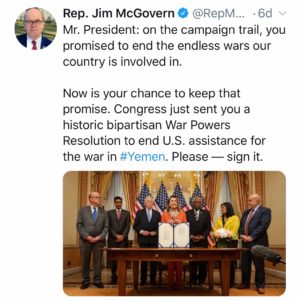 Look at McGovern call out Trump, “you promised to end the endless wars our country is involved in…”

Problem is, his party has opposed Trump as he has tried to “end the endless wars”. Here is an article from February 1, 2019 from Politico:

“President Donald Trump defended his decision to remove troops from Syria and Afghanistan in a series of tweets Friday morning . . .

Trump said he inherited ‘a total mess in Syria and Afghanistan,’ wars he pledged to pull out of during his campaign. ‘We spend $50 Billion a year in Afghanistan and have hit them so hard that we are now talking peace … after 18 long years,’ the president tweeted. . .

Trump unexpectedly announced in December that he would pull thousands of U.S. troops from Syria and Afghanistan, a move that prompted bipartisan backlash from lawmakers and his own national security team. . . .”

The only time Democrats and Republicans were bipartisan was to oppose Trump trying to “end the endless wars.” Here’s McGovern’s tweet supporting Trump’s effort: 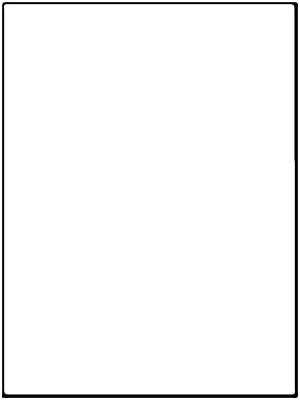 That’s right, McGovern was silent when Trump was trying to “end the endless wars”. What a complete partisan tool.

As with the rest of the partisan hack democrats, here he is calling for Trump to release his taxes. Keep in mind there is no law requiring Trump to do so, its just pure harassment. McGovern would strip your rights and privacy in a minute if it meant he could score cheap political points.

McGovern, release your tax returns! We’d all like to know how you became a millionaire while working in Congress.

There are more leftist tweets about net neutrality, despite every prediction concerning the same not coming true. And, of course, net neutrality would slow our advances towards 5G and thus our competitiveness against other nations. But McGovern hates Americans, so its a win, win in his book. He also want’s to go back to the 1980’s and reclaim the left’s anti-nuclear stance.

Of course, McGovern’s week on twitter would be incomplete without a partisan hit-job on Trump’s Jewish son-in-law: 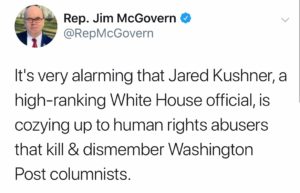 If Jared Kushner was Muslim, this tweet would be hate speech in McGovern’s world. But, McGovern really shouldn’t be throwing stones. How is this for cozying up to a murdering thug: 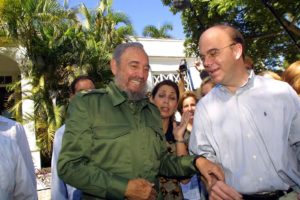 What an hypocritical idiot!

If there is any cause that will destroy America, is anti-American, or that he can twist to attack our President, McGovern supports it.

No matter how stupid it is. 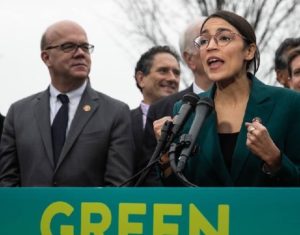