Who is Rep. Richard Neal? Well, he’s the western Massachusetts congressman that chairs the Ways & Means Committee. Keep in mind that Worcester’s own Rep Jim McGovern chairs the Rules committee. For a party that claims to be about diversity and accuses everyone of racism, they have no shortage of old white men in the most powerful positions.

It’s not as if Neal hasn’t been in congress since I graduated high school in 1989, so don’t blame him for all the alleged problems in our country that the democrats constantly complain about. He was Mayor of Springfield prior to becoming a congressman. In sum, he hasn’t held a real job in 40 years.

He’s been real busy trying to abuse the power given to him by those that elected him to go on a partisan political fishing expedition by demanding confidential tax returns: 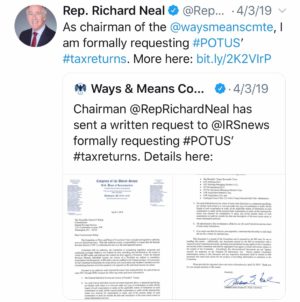 Of course, he was formally denied the returns, so he sent another demand letter. He really means it this time!

The problem is clear to every thinking American. If he can get the President’s tax returns for purposes of political grandstanding, he can get any private citizen’s returns. American’s haven’t forgotten the IRS abuse scandal where they target conservative organizations. Americans know what this is and what it leads to. We should never, ever, live in fear of our elected officials and they should never have the power over us to cause fear, but they do.

Here he is with the rest of the Massachusetts delegation, throwing down on anyone that opposes his union friends: 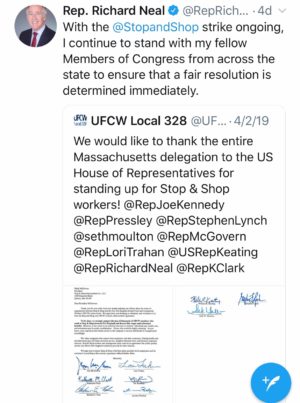 Don’t you dare cross that union line, or you will be publically shamed as with Ray Bourque. Neal may request a copy of your tax returns! 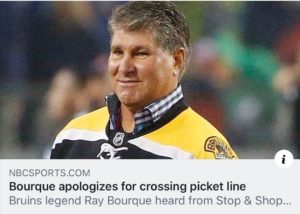 Neal is a partisan’s partisan. He takes credit for other people’s work just like his friend McGovern: 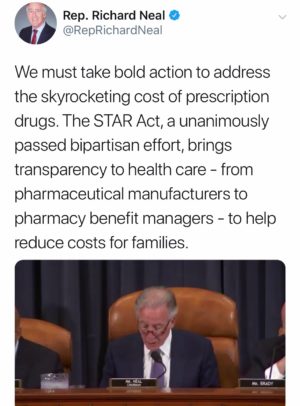 President Trump has been in a battle with the pharmaceutical companies and has been working with both parties to get it done for nearly a year. Forbes just did an article back in January stating “The Trump Administration has made it clear, however, that it won’t tolerate business as usual. And, legislators on both sides of the aisle appear to be similarly inclined.” But Neal pretends that he’s doing something on his committee other than going after people’s tax returns. Other than claim credit, he does nothing: 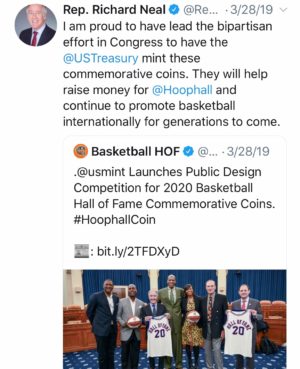 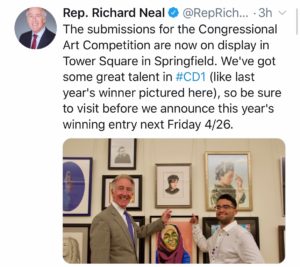 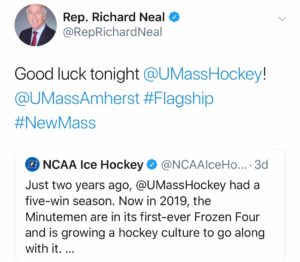 Oh wait, UMass! Talk show host Jim Polito just did a show about anti-Semitism at UMass “UMass Amherst touts themselves as a place where hate has no home. Unfortunately, the University will soon be home to a panel containing anti-Semitic thinkers.” Neal seems to have a lot in common with his friend McGovern – remember McGovern’s support for the anti-Semitic and anti-American Rep. Ilhan Omar? Something seems amiss with the democrat party and Neal.

At least he is for the little guy, going after those evil republican tax cuts with the same talking points as the rest of the democrats: 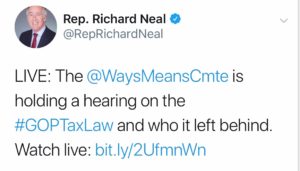 Those mean spirited tax cuts that no one got… 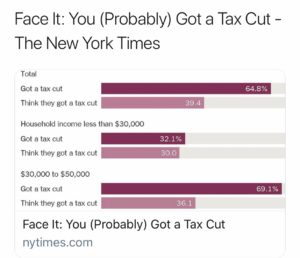 Nice try, Neal! Even the NY Times doesn’t have your back on this one. From the article “To a large degree, the gap between perception and reality on the tax cuts appears to flow from a sustained — and misleading — effort by liberal opponents of the law to brand it as a broad middle-class tax increase.” 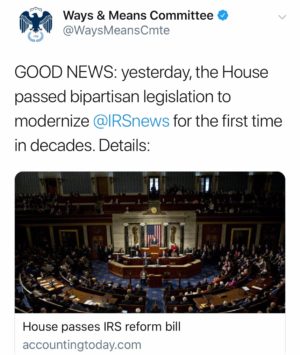