Dropping in the polls, Senator Warren goes off the reservation

Home/The Worcester Independent Leader Blog/Dropping in the polls, Senator Warren goes off the reservation
Previous Next

Dropping in the polls, Senator Warren goes off the reservation

Just last week, noted that Senator Warren wasn’t getting any love in Worcester. A recent granite state poll put her at 5% in New Hampshire, a drop of 12% from the prior poll. If she can’t win New Hampshire with its Boston media market, she’s done and she knows it. Hence her latest far-left socialist campaign promises. She’s clearly gone off the reservation.

Her first proposal was a call to initiate impeachment of the President after the Mueller report found no collusion. Imagine a lawyer that seeks to prosecute someone for not committing a crime and that lawyer would look exactly like Warren. 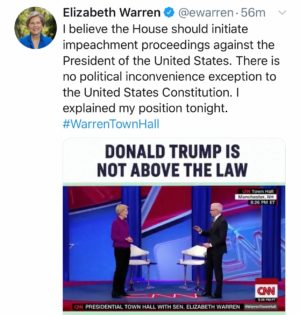 Of course, the Speaker of the House, where impeachment must begin, and other non-desperate politicians know that this is the wrong play. The most favorable left-wing polling puts it at 34%, so it is likely in the 20% area, at most. Heck, even Senator Sanders is talking it down. She isn’t moving her numbers with this proposal.

But, Warren needs to make some noise to help boost her polling numbers and associated donations, so she doubled down on the New Green Deal. Of course, she voted “present” when the bill was presented, but now she really means it. 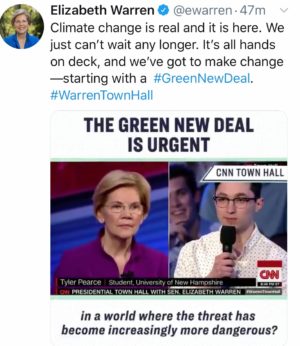 It might help her a bit with democrats in the primary as they favor it by 51%, but as she is running in a crowded field a proposal with favorability rating within the margin of error will not get her far. That, and the fact that 51% of Americans oppose the New Green Deal tells donors she would be coming out of the primaries in a potentially difficult position of explaining where the $8.3 trillion to $12.3 trillion will come from to pay for it. Whereas every other democrat candidate is also running on the New Green Deal, this does nothing for her.

It appears she decided to laser-focus on the college students, proposing “erasing” $640 billion or $1.25 trillion in student loan debts. Heck, she’s already going to destroy the economy with the New Green Deal, so may as well promise bigly. 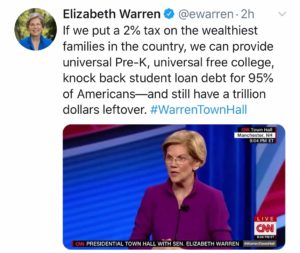 Free tuition and student loan forgiveness could potentially increase the number of college students that come out to vote for her, but college students don’t vote in primaries and they aren’t a large population in New Hampshire. She also was paid $400,000 to teach one class, not sure many college students will trust her talking tuition. She could triple her numbers of college voters and not move her polling.

The New Green Deal not enough, how about banning energy? In an effort to make sure she doesn’t flip a single purple state in the general election, Warren decided to ban fossil fuel drilling. Apparently, being energy independent and not relying on middle-eastern oil is against Warren’s economic and foreign policy.

Other than assuring a campaign headache during the general, should she make it, who is this proposal supposed to appeal to? The good people of New Hampshire could care less if there is drilling in North Dakota. It does nothing to move her polling and makes her look as if she is desperate for attention.

Protect and expand Medicare? Great proposal! I remember when Walter Mondale ran on the same thing back in the 1980s. Interestingly, it was a republican, President Bush, that actually expanded Medicare.

Problem is she makes it about race and Trump has led on the issue. Democrats have failed to deliver on criminal justice reform and just got decades of broken promises exposed when Trump actually did something. That, and now that Sanders has proposed allowing incarcerated criminals to vote (to include the Boston Marathon terrorist), this proposal is suddenly problematic. Too bad, it was one of her better talking points. 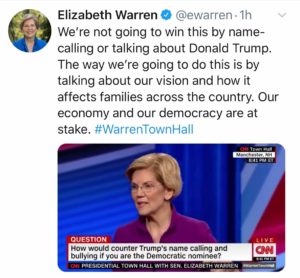 Truthfully, she should probably engage in name-calling at this point. Her current attempts have missed the target. Maybe a catchy name such as “dumpy Trumpy” or something. Couldn’t be any worse than what she has been doing.

Oh wait, she’s running against Cersei Lannister, a character from the Game of Thrones fantasy series. 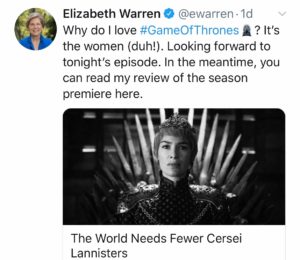