State Rep. Jim O’Day and the profit in drug addiction

State Rep. Jim O’Day and the profit in drug addiction

The West Boylston Town Semi-Annual meeting was a real treat for those of us that follow politics.

As always, they saved the best item for last, the prohibition of “Marijuana Establishments”.

I support the will of the voters on the issue of the sale of marijuana. When the Worcester City Council was trying to ban it in Worcester, I advised that the voters had spoken and, as elected officials love their vote, I demanded that they respect that vote. But, the legislation had built in controls that were problematic at the West Boylston town meeting.

The sale of marijuana has already had issues with overdoses . I’m not going to do an entire article about reported marijuana overdoses, nor am I going to enter into a debate of marijuana versus alcohol. Irresponsible use of any drug is harmful to the person and the public, so if a town doesn’t want either sold within its limits, it has the right to say no.

I mention the overdoses from marijuana and the alcohol issues in the same paragraph because with both, a town has the right to ban them. The town of Clinton is well-known for the number of bars in the town, because it is surrounded by towns that refuse to allow the sale of alcohol.

Being a “dry” town in Massachusetts is allowed by law, but you wouldn’t have known that at the West Boylston meeting. Instead, there was a chorus of “you can’t ban it now” from the special interests involved in the “drug industry.” When I use the term “drug industry” I refer to both the sales and the addiction sides of said industry as they both profit off of it.

The drug industry lobby claimed that the Attorney General would not allow the town to change its policies this late in the game. Of course, the Attorney General wasn’t at the meeting, nor is she the final word on what is law in Massachusetts. The issue isn’t about banning a business, such as Chick Fil A based on religious beliefs, it is about a controlled substance that is regulated and towns have a legal right to prohibit.

The item to prohibit marijuana establishments failed. It was pure democracy in action, as West Boylston town meetings are by voting majority (in this case the vote to prohibit needed a super majority). The drug industry lobby brought in their votes, scare tactics, and the regular citizens sat at home.

The drug industry lobby also brought in its leader, State Representative Jim O’Day to push their agenda and bring a few friends to vote his way as well. It is a fine tactic and would have no issues, except that once again O’Day failed to advise his questionable relationship with the drug industry.

Just a short time ago, O’Day admitted that he makes money from the drug industry. I covered his dealings when he was lobbying for the drug industry to open an addiction treatment facility in Worcester over in the South Main area. Click here to read the article.

The facility was owned by Timothy Rassias – a man the Secretary of the Commonwealth accused of improperly selling hedge funds in 1999. It appears Rassias got into the for-profit drug addiction industry after allegedly taking advantage of “average middle class people” to the tune of $3.5 million.

After calling him out in the above article, O’Day went on the attack. So, I looked further into his relationship with Rassias, it wasn’t pretty. Click here to read the article.

O’Day wasn’t just and employee of Rassias, he was the Director and Treasurer of the Spring Hill Recovery Center. His involvement should have been clearly disclosed. In fact, he probably shouldn’t have spoken at all. And for any Worcester readers, Brenda Jenkins of Mosaic fame was also listed as a Director. Mosaic came under an audit for failure to provide services it billed for and was put on financial probation by the Attorney General’s office. O’Day has some really outstanding friends.

Of course, both O’Day and Jenkins were removed from the corporate filings after I published the article, likely in an attempt to cover their tracks. I highly doubt that O’Day is no longer working for Rassias or involved with him in any financial capacity. The last time any inquiry was made to O’Day, he went on a rant and ignored the responding to the specific questions, which is seems to be what politicians do when they are cornered.

Now, O’Day is pushing for drug sales in West Boylston while failing to disclose his relationship with drug addiction treatment centers. But, that’s not all by a long shot.

While having a financial interest in addiction treatment, he is pushing drug sales, and he proposed a bill to tax opioid pain relievers to fund “treatment of substance abuse . . . and establishing programs like new addiction treatment and sober living facilities.” Here is the link to the article, I highly recommend you read it.

Quite the business a triangle O’Day seems to have going on here. He pushes for drug sales while using his elected position to use state funds to pay for addiction recovery while profiting from the addiction industry. Will his next move be to open a pot shop with a revolving door to his addiction recovery center?

I’m not against marijuana sales or treatment centers, but I have difficulty with O’Day’s continued failure to disclose his financial interests as well as him pushing drugs sales, while pushing legislation to fund drug treatment, while profiting from the treatment of drug addition.

Keep in mind that O’Day represents Worcester and West Boylston. While opioid deaths have been decreasing in Massachusetts, they have actually gotten worse in Worcester. 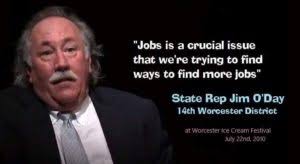