It is an election year in Worcester. Naturally, the local media are pushing out the propaganda at an increased pace as failures of the current council and manager are obvious:

Instead of pushing out real news about the state of Worcester, instead Michael Bonner over at Masslive decided to push out this headline: “Renters searching to leave Boston look to Worcester as a potential top choice, a new report says.”

Losing to Providence isn’t winning, it is embarrassing. 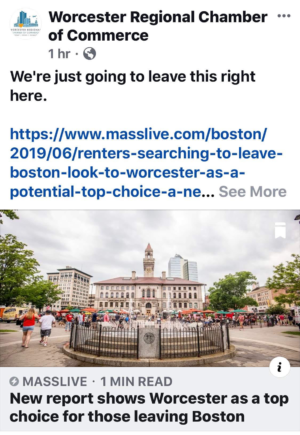 Oh, the Worcester Chamber, makes sense now. Pretty sure that Bonner over at Masslive didn’t just come across the “report” on his own. The chamber has been under fire for the last few weeks and apparently dialed this one up and fed it to Masslive.

It’s not as if the Worcester rental market isn’t sponsoring ads for rental units and offering two months of free rent. Wait, they are… Shocking that sponsored ads and freebees would get more clicks.

Meanwhile, in Boston and surrounding towns, you have to pay a rental agency a fee to get an apartment. A modicum of common sense would have immediately dismissed this pathetic narrative, but it appears Masslive is hoping that they can take over as the propaganda machine now that Worcester Magazine no longer has any reporters.

What could possibly be more pathetic than pushing out a meaningless propaganda piece that shows Worcester losing to Providence? Well, this…

“Ironically, renters in Worcester were only topped by New York City dwellers as residents looking to move to Boston. Worcester renters also looked to Providence and Hartford as new homes.”

The headline probably should have read “Worcester renters are so desperate to leave city, they are considering Providence and Hartford”.

Providence is bad enough, but Hartford? How bad is the direction of the city when its residents would leave the city to live in Hartford?