Last week Jay H. Givan at the Worcester Telegram and Gazette posted a blog about the lack of parking in the plans for the Worcester ballpark.

“Polar Park, the upcoming home of what will be the Worcester Red Sox, the AAA affiliate of the Boston Red Sox, is planned to be a 10,000 seat stadium with 350-500 parking spaces.”

In the blog, Givan also cited an article by the Worcester Business Journal wherein a courageous business owner in the Canal District points out that the ballpark will essentially make it difficult for regular customers to frequent her establishment because there will be no parking.

Last week’s article Worcester’s ballpark and the inevitable fleecing of the taxpayers included an analysis with  materials sourced from Worcester Magazine concerning the “accidental” inclusion of additional properties to be taken by eminent domain that somehow slipped into submissions for approval. The lack of parking in the design was unlikely done by accident. It seems clear that the city intended to take additional property, but did not advise of the same upfront as to get approval based on a $101 million budget for the ballpark instead of a $150 million budget for the ballpark with parking that would also wipe out many popular businesses.

Additional parking needs are inevitable. Either the entire plan and budget estimate is in error or the administration has not been honest. You pick: incompetence or lack of veracity.

There is no argument to support that there is sufficient parking in the design.

Initially, the comment below that was posted on last week’s article, seemed like a mundane statement about a similar “bait and switch” budget for the ballpark in St. Petersburg, Florida. There was a slight twist as it pointed out corruption by land purchasers that were “friends of” the administration: 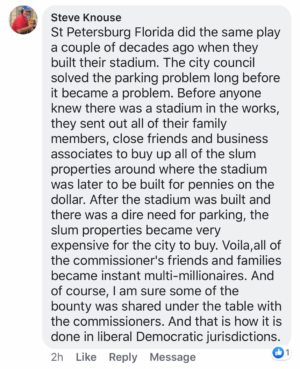 I thought about the comment and dismissed the notion that anyone on council would be so brazen mostly because no one on council has the money or a relative with money that could take advantage of the “accidental” lack of parking. And I was wrong…

The article was about a shuttle, but the real story was much more interesting:

“The incoming closure of that parking lot on Assonet Street sparked an idea between Crompton Place owner Dino Lorusso, Canal District developer Ed Murphy and Worcester Public Market owner Allen Fletcher. The group has purchased four lots for customers to park in and is starting a free shuttle service.

The group has already cleaned up and striped 156 Washington St., which will be available for parking starting this weekend.”

Allen Fletcher, a trust fund baby that was handed an $838,000 tax break and is “friends” of Councilor Sarai Rivera is buying up parking lots around the ballpark?

Weird. It is almost as if he seems to “accidentally” profit off the backs of the taxpayers at every turn.

Also weird. It is as if he knew that there would be a parking issue from the ballpark development and was able to buy up properties in advance.  Interesting that they offer a “free shuttle” yet do not say that the parking will be free.  If it is now, it won’t be later when it is actually needed.  They didn’t buy these properties as an altruistic gesture.  They bought them as a calculated business venture.

Here he is hanging out with Rivera right before he got his big tax break:

Fletcher’s name has come up before:

“Alan Fletcher is about to be handed a massive tax cut on his property in the Canal District to the tune of $838,000.00. Trust me, he already knows he has 10 votes. So, here he is hanging out with Councilor Saria Rivera, a member of the Economic Development Subcommittee that just days before approved of Mr. Fletcher’s tax break. His audacity would be admirable, if it wasn’t so appalling.

Of course, Councilor Rivera was placed on the Economic Development Subcommittee by Mayor Joe Petty. She knows the deal. She is supposed to vote for every rich and politically connected member of the boy’s club to receive tax breaks and she does her job!”

Dianne Williamson does it again!

(local media to the defense of Worcester’s elite)

“The premise of Williamson’s article was that Fletcher deserved a tax break because he ‘has spent his whole life giving back to the community’ and went to Puerto Rico because he is a humanitarian. Truth is, he went to check on his house and is now asking others to give him Home Depot gift cards.”

“’Westminster beermaker Wachusett Brewing Co. will operate a taproom in the new Worcester Public Market set to open this fall.

The public market and the taproom will be on the first floor of developer Allen Fletcher’s $21-million Harding Green project. The upper floors of the development will be called the Kelley Square Lofts, comprised of 48 market-rate apartments.’

Allen Fletcher’s $21-million project? It should be called the Worcester taxpayers $21-million give away to a trust-fund baby. I’ve already written about Fletcher and his interesting relationship with City Councilor Sarai Rivera – who just happened to sit on the Economic Development Sub-committee that approved the massive tax break given to Fletcher for ‘his’ project.”

Oh well. When the city increases taxes, creates new taxes, and cuts programs to fund this disaster, at least Fletcher will still have his home Puerto Rico to vacation at. Hopefully he was able to replace those darn windows.