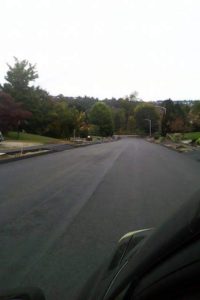 The above photo was sent to me by a very angry constituent. It is a photo of Joe Petty’s street being completely repaved.

There are several hundred miles of city streets and sidewalks that need repair and replacement, but unfortunately for the residents on said streets, Petty comes first.

Here is a picture of Petty’s street and sidewalks prior to the re-pavement: 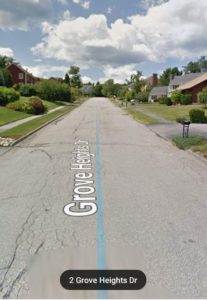 What makes it worse, is that it is a dead-end street that sees little use, but here is the City replacing the street and sidewalks on both sides of Petty’s home, picture here: 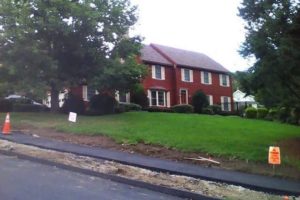 This is how the privileged class lives. Petty has a cushy no-show, taxpayer funded job in Boston making a healthy six figures. While the per capita income in Worcester is $24,447 per year. Petty lives on the West Side, a stone’s throw from Holden in a nearly half million dollar home:

What is of interest is that most petitions for streets and sidewalks have a name of the person that requested the work: 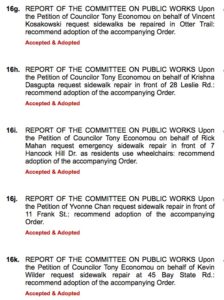 Notice “on the behalf of” on all of the above?

Well, here is the Order for Petty: 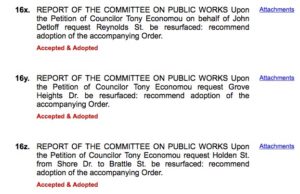 See that, item 16y? Right in the middle of two other Orders, no name. No “on the behalf of”. The other Orders have a name, but not for Petty’s street. The Order came from nowhere!

But wait, item 16z, Holden Street from Shore Dr. to Brattle Street to be resurfaced also doesn’t have a requesting party either. Would seem weird until you check where Tony Economou lives:

Yes, Economou lives on Holden Street, between Shore Drive and Brattle Street. I’m sure no one saw that one coming.

It appears that Petty and Economou are taking care of their streets, while streets that really need repaving and sidewalks are being neglected.

You see, once Petty learned how to fake sincerity he no longer needed credibility. He just does whatever he wants. He is the chosen class. He attended private schools and sent his child to a private school when the Worcester Schools were having troubles he refused to acknowledge. He lives as far away from the inner city as possible while making a six figure salary off the backs of the working poor and those on a fixed income. He takes care of himself and his friends, like Economou, and they take care of him. They call it working together, but the truth is it is trading favors.

Never forget, Petty sat there with his microphone on calling his supporters “stupid”, “morons”, and “not very educated”. He has nothing but contempt for the hard-working taxpayers of Worcester. 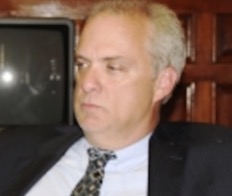