Worcester, MA – #9 most expensive place to live in US

Home/The Worcester Independent Leader Blog/Worcester, MA – #9 most expensive place to live in US
Previous Next

Worcester, MA – #9 most expensive place to live in US

[Editor’s note: earlier version stated Boston was not on list – an obvious error – thank you to Fred Moriarty for pointing it out]

Last week we found out that Worcester renters were looking to move to Providence and Hartford and opined how bad things had to be in Worcester to consider Hartford a step up, now we know why.

In a study of the top 10 places where you can earn six figures and still be broke, Worcester is ranked #9. Just for prospective, keep in mind #8 was New York. 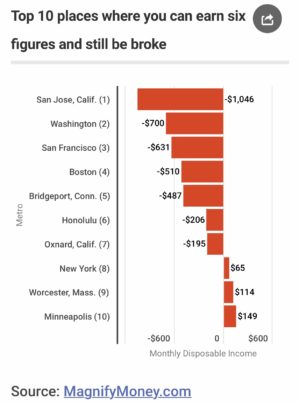 Wow, a whopping $114.00 in monthly disposable income. No wonder Worcester residents refuse to pay for parking – they can’t afford it!

Yet “Honest” Ed Augustus, Joe Petty and his minions as well as Tim Murray at the Chamber of Commerce continue to claim Worcester is the future bedroom community to Boston. It isn’t going to happen. Traveling one way for an hour and a half just isn’t going to work at those costs.

For comparison purposes, you can live in Natick, MA in a 770 square foot one bedroom condo with all the amenities (parking, pool, tennis court, walkability, volleyball, restaurants – only thing missing is the crime) for about $1,400/month versus a similar square foot apartment in the canal district for about $1,700/month with limited parking and all the joys of the canal district on a Friday or Saturday night. Difference in commute to Boston – about 45 minutes less each way.

Let’s look at the analysis behind Worcester’s 9th place finish:

“For this study, we looked at data from the U.S. Department of Housing and Urban Development (HUD)’s Location Affordability Index (updated in March 2019), which also uses data from the 2012-2016 American Community Survey, to see which cities would leave a dual-professional households earning $100,000 with little to no disposable income. We considered the average cost of housing (e.g. insurance and taxes), transportation (e.g. car payments, parking, tolls, bus fare, etc.), childcare, food, retirement contributions, utilities and other line items in a typical family’s budget.

After tallying up all of the expenses, we were able to calculate the disposable income of families living a typical six-figure lifestyle in various metro areas around the United States. Then, we ranked the top cities where families earning $100,000 a year would have the least (and most) amount of money leftover at the end of the month. Here’s what we learned.”

What is it with this so-called progressive democrat leadership in Worcester?

They claim to care about the poor, yet Worcester has the fifth highest percentage of homeless students among US cities. According to MSN.com, the Worcester metro ranks 20th out of cities hit the hardest by extreme poverty. Since 2010, the share of the poor population living in neighborhoods where at least 40% of the population live below the poverty line INCREASED by 3.6 percentage points to 12%. The number of Worcester neighborhoods in which at least 40% of the population are poor doubled from four to eight.

They claim to care about the middle class, yet New York City is cheaper to live in? All they do is increase taxes and now are trying to find new things to tax. The last budget increased spending by 5% – and council took a 2.5% raise at the beginning of their term – despite economic growth of 0.1% and real estate growth of 0.0005%

If you are like most people, you probably have taken a look at your finances and assumed you were doing something wrong as you had no money.