Yesterday I detailed U.S. Rep Jim McGovern’s support for an amendment to the democrat’s H.R. 1 aka the “Democrat Politician Protection Act” that would lower the voting age to 16. McGovern is pretty used to busing in voters and protestors, so busing children to the polls would be old hat. Here is the link:

Here’s McGovern’s tweet on the recently passed H.R. 1. act (It likely isn’t going anywhere in the Senate, last I heard, even Chuck Schumer isn’t buying into it): 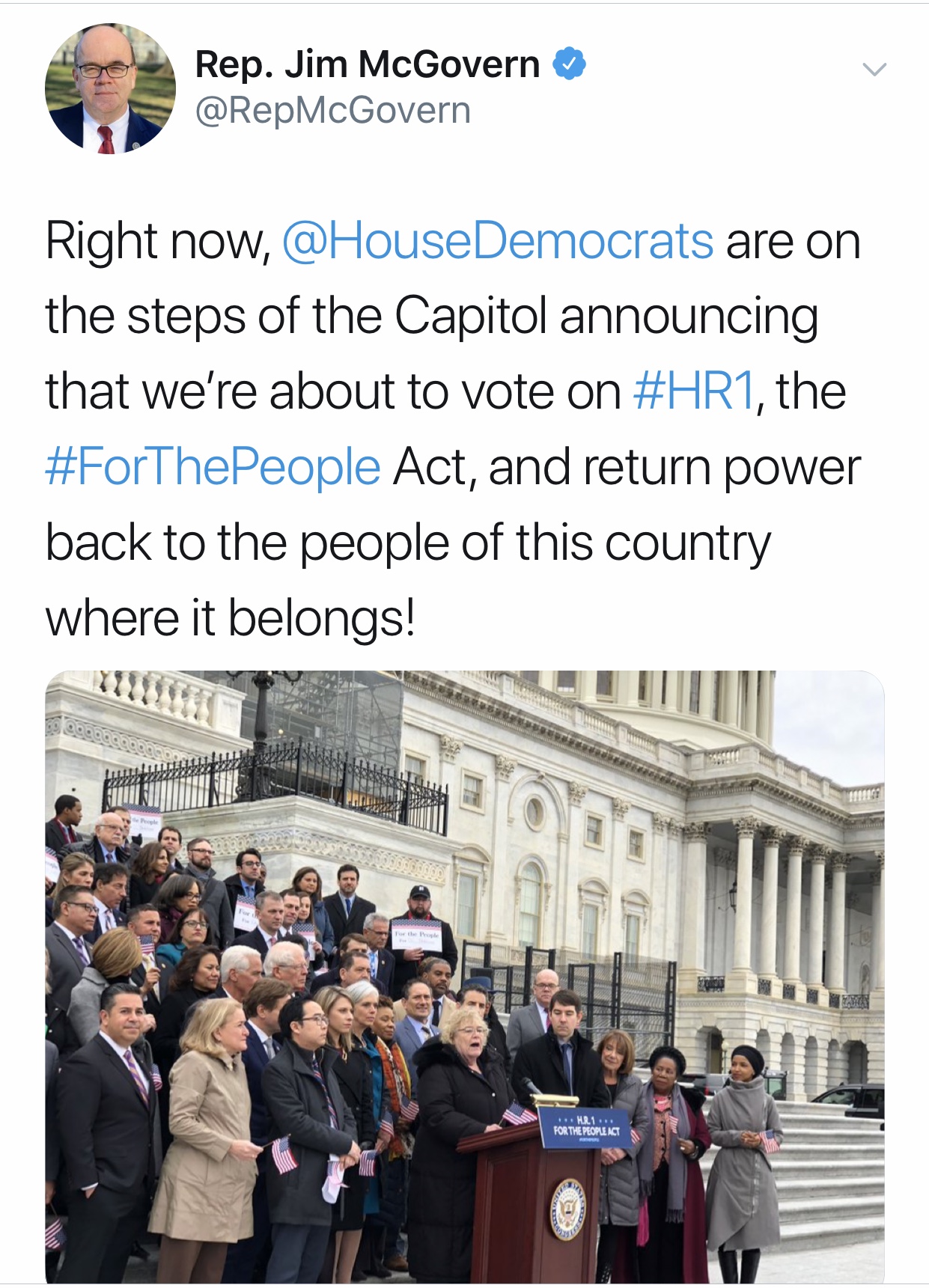 “When we talk about newcomers, we have to recognize the constant reinvigoration of America that they are, that we all have been – our families. And that, unless you’re blessed to be Native American – which is a blessing in itself that we respect – but that constant reinvigoration of hope, determination, optimism, courage, to make the future better for the next generation, those are American traits.

And these newcomers make America more American. And we want them, when they come here, to be fully part of our system. And that means not suppressing the vote of our newcomers to America.”

The “newcomers” are the hundreds of thousands of illegal aliens and border crossers who arrive at the southern border every year. I guess when the terms “dreamer” and “undocumented” fail to elicit the hoped-for emotional response, democrats change the language. They don’t care what you call them as long as you call them “voters. Pelosi went on to say:

“We, in California, see people coming from a different direction, but the same welcome. You see them coming, many from the south, southern border, but should be the same welcome…”

H.R. 1 isn’t about returning power to the people and McGovern knows it. It’s about using children and illegals to strip the vote from Americans.

At the current rate, the country’s legal immigration system admits more than 1.2 million of those crossing our borders and is set to hand Democrats nationwide electoral dominance in national elections.

In the 2020 presidential election, the Pew Research Center predicts that about 1-in-10 U.S. voters will be foreign-born residents — a statistic that vastly favors Democrats. As with seeking to allow 16 year olds to vote, the “newcomers” haven’t been around long enough to who the democrats really are. By the time they find out they are the same communists they fled from, it will be too late.

But there is another reason H.R. 1 has been nicknamed the “Democrat Politician Protection Act” and it isn’t just because it seeks to allow those that enter our country illegally or criminals to vote, it also seeks to stomp out any opposition to the democrat party, specifically targeting the Green Party.

I’m no fan of the communist Green Party, but I do enjoy the thought of arguing with a leftist over H.R. 1 and pointing out that the democrats aren’t seeking free and fair elections.

Jill Stein’s campaign barely met the old threshold in about 22 states. Here’s a quote from a member of her campaign team, Bruce A. Dixon:

“Eliminating federal matching funds for a Green Party presidential campaign would mean all but certain erasure of the Green Party from the ballot, not just for presidential but for local offices in at least another dozen states, since the laws of many states either require a presidential candidate, or a certain percentage of the vote to maintain a Green ballot line, and without a presidential candidate on the ballot – quite an expensive thing to do in many states – the number of votes our party can get will plummet. For a generation now, most Americans have told pollsters they want to see a real third party, not in the middle of the two, but well to the left of both. HR 1 isn’t serious about voting rights, but it’s deadly serious about limiting voter choices at the polls.”

More than likely, this would have a similar effect on the Libertarian Party, but as Republicans believe in fair elections, they aren’t supporting it.

Yes, it is a power grab as McGovern admits, but it isn’t for the benefit of special interests or the American people. It helps him and his party maintain power.

And Jim, you’re not funny. The play on words is such an old, worn-out, trick. No one thinks your snarky comments on Twitter are witty. You come across like a jilted ex.

I guess we all now know why McGovern’s red-nosed boy, Joe Petty, bused in protestors at his rally against me for asking Worcester to declare whether or not it was a sanctuary city. (They voted not to vote on the resolution). As you may recall, Petty had gone down to meet with McGovern in D.C. the weekend before the protest. Apparently, McGovern and Petty want to nullify your vote with that of a “newcomer”. But, they both still want you “morons” to pay taxes to support them and their “newcomers.” Enjoy!

For those not familiar “morons” is a nod to Petty’s hot mic incident when he call his own supporters morons several times.