U.S. Rep. Ayanna Pressley is apparently feeling left out of the stupid that has been the democrat controlled House, so she added an amendment to the H.R. 1 aka the “Democrat Politician Protection Act.”

Poor thing has seen Alexandria Ocasio-Cortez, the “cow fart” girl, and her anti-Semitic pals Reps. Rashida Tlaib and Ilhan Omar all over the news and was apparently jealous. Unfortunately for her narcissistic personality, her attempt at getting noticed failed miserably and is pretty much dead on arrival.

Her big plan is to change the voting age from 18 years old to 16. In sum, she noticed that some teenagers were anti-gun and still believed in climate change. After all, for most, it has only been 4-5 years since they stopped believing in Santa Claus and the Easter Bunny. And, like most democrats and college students, they haven’t yet figured out that money doesn’t grow on trees.

And right on cue, always ready to back the dumbest ideas of any leftish democrat so that he can stay in power was Worcester’s very own Rep Jim McGovern. Like a moth to a candle, he went all in immediately: 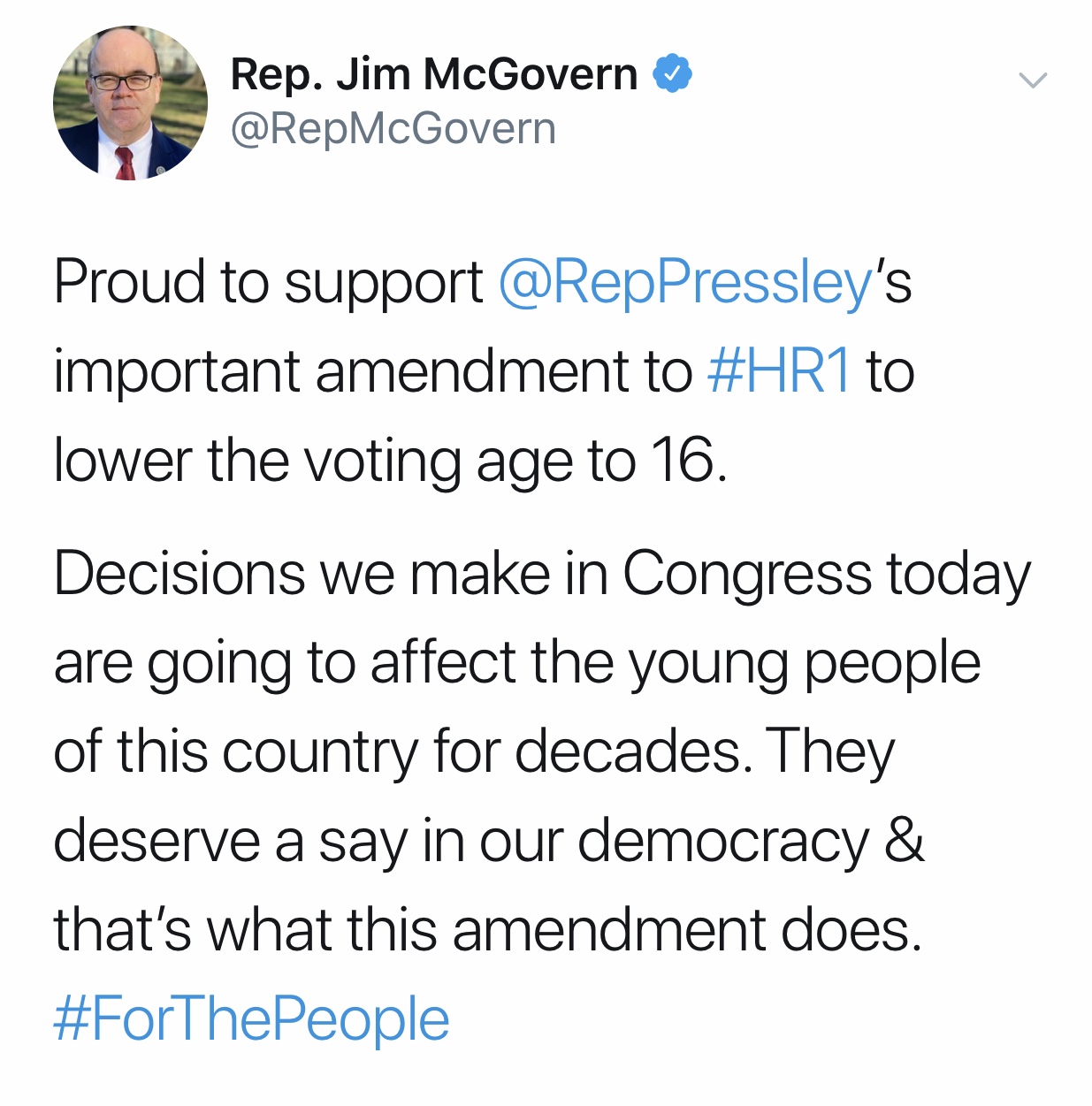 While his minions on the Worcester City Council, the City Manager’s office, and in the State House constantly push to increase age limits from 18 years old to 21 on tobacco and gun ownership, because 18 year olds are not responsible enough to purchase said items, McGovern thinks that 16 year olds are capable of running our government.

At least he’s consistently inconsistent. Or maybe he’s looked around a room full of democrats and realized that a group of 16 years olds can make better decisions. If that was his argument, I’d agree.

MassGOP chairman Jim Lyons told the Boston Herald. “Almost all 16-year-olds I know I don’t believe they should have the privilege or the authority to vote. They simply haven’t matured to the level that they can make those types of decisions.” Lyons added that Democrats have prioritized raising various age requirements “in just about everything,” including for smoking, using tanning beds and the age for juvenile crimes.

Someone should tell Lyons that using logic in a debate with a zealot seeking to use children to gain power is a serious waste of time.

Massachusetts Governor Charlie Baker’s response was as timid and obtuse as can be expected, “I did raise three teenagers, and based on that I’d be pretty dubious about lowering it to 16.”

What about a really mature 14 year old?

If ages are arbitrary and capricious, let’s do away with all age requirements.

To be fair, they wouldn’t be any less informed than most voters as they continually elect McGovern…

More on McGovern’s support of the H.R. 1 bill tomorrow. It’s a hoot!