Diminishing returns, also called law of diminishing returns or principle of diminishing marginal productivity, economic law stating that if one input in the production of a commodity is increased while all other inputs are held fixed, a point will eventually be reached at which additions of the input yield progressively smaller, or diminishing, increases in output.

In beautiful Worcester, the latest news pushed out to pump up an out-of-touch administration and lackluster politicians by their friends in the “news” media is a propaganda piece from the Worcester Business Journal on May 23, 2019 titled “Wachusett Brewing to open taproom in Kelley Square market”:

“Westminster beermaker Wachusett Brewing Co. will operate a taproom in the new Worcester Public Market set to open this fall.

The public market and the taproom will be on the first floor of developer Allen Fletcher’s $21-million Harding Green project. The upper floors of the development will be called the Kelley Square Lofts, comprised of 48 market-rate apartments.”

Allen Fletcher’s $21-million project? It should be called the Worcester taxpayers $21-million give away to a trust-fund baby. I’ve already written about Fletcher and his interesting relationship with City Councilor Sarai Rivera – who just happened to sit on the Economic Development Sub-committee that approved the massive tax break given to Fletcher for “his” project. Here is the article. (Disclaimer: I voted against the project).

But, despite the diminishing returns to taxpayers the City continues to hand out tax breaks to millionaire trust-fund babies and billionaire ballpark developers. Despite all the chatter and constant stream of election year propaganda, here is the reality of the “Worcester Renaissance”:

Here is the article 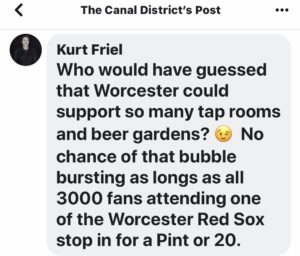 Kurt Friel isn’t the hero we deserve, but he is the one we got. He nails it better than anything I can say to further the argument. (Disclaimer: I have no idea who Friel is, never met him).

More places to buy overpriced beer and more market-rate apartments for the all the commuters that want to take the daily three hours commuting into Boston (they will last about a year and then move to Natick) isn’t “development”, it is market saturation and will yield a diminishing rate of return.

It is redundant “development” all created by tax breaks and taxpayer liabilities based around the ballpark for a AAA team in a city where sports teams have failed over and over again. No, Red Sox fans aren’t going to flock to Worcester to see the players of the future at the rates the “leadership” of the city claim. In fact, baseball’s popularity is and has been in decline. Per the Washington Post, “attendance is down for most major league franchises, including a drop of more than 10% from last year’s figures for the Washington Nationals.”

It’s almost as if Worcester went all in right before a market correction. It’s not as if Worcester has gambled and lost on the stock market or has lost money every single year on Union Station, the DCU Center, and golf course (enterprise accounts just like the ball park account). But, I’ve already detailed the history of gambling with other people’s money. Here is the article

Of course, the real game in the city won’t be at the ball park, it will be at City Hall with the accounting games being played with how hide the financial losses (as they attempted to do with the golf course). Unfortunately, the losers will be the tax payers.